AC34 – from Trucks to Ferraris 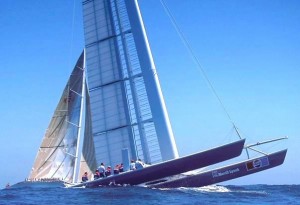 Multihull fans around the world rose this morning to the greatest news since Phil Weld won the OSTAR on Moxie. The future America’s Cup yachts will be 72′ catamaran, 30knot speed machines that carry solid wing sails – the size of Boeing aircraft wings. The best is – the Cup will be held in 2013 in San Francisco and an entire fleet of smaller AC 45’s will be built to ease the teams into this exciting new class. They will later be used for a ‘Junior AC’ circuit that will create a sort of minor leagues for future AC sailors. The AC will follow the concept similar to the wandering Formula 1 racing tour. Elimination regattas will be held around the world and the most beautiful waterfront cities will be chosen to host these stages. The plan is to load the entire fleet, race boats, media and support vessels on a giant freighter and ship them from place to place. This will make it cheaper for the teams and consolidate, and streamline media coverage and logistics. Now this is the future and brings even more “catamaran thinking” to the mainstream sailor. From Trucks to Ferraris…finally, it took 159 years. Bravo to our friend Pete Melvin and the AC34 committee!