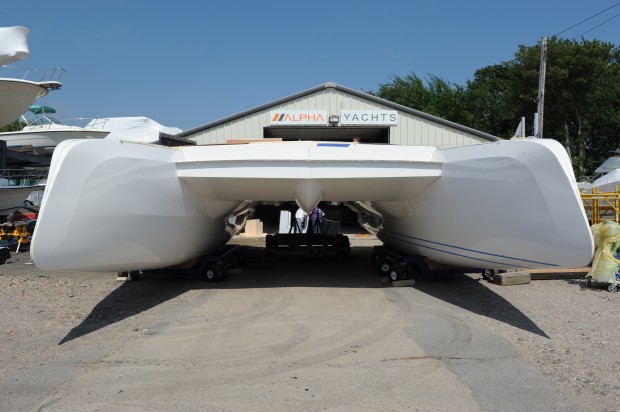 In anticipation of her launch the Alpha Team rolled out Alpha 42-01 with only inches of clearance to spare. The massive one piece, rear-deck and transom mold was carefully released from the boat and transported to Building #2 where the actual cockpit part will be laid up and completed next week. In the mean time Yanmar engines, Marvair air conditioning units as well as the Selden mast arrived. Note the roof strengthening Omegas which are being laid up on the saloon top plug. They will greatly lighten as well as stiffen the roof via this grid-like structure. They have been named “the Octopus” – a web of strong girders that support the saloon overhead. Also completed is the owner head plug as well as the companion way steps leading into both hulls. See pictures below: