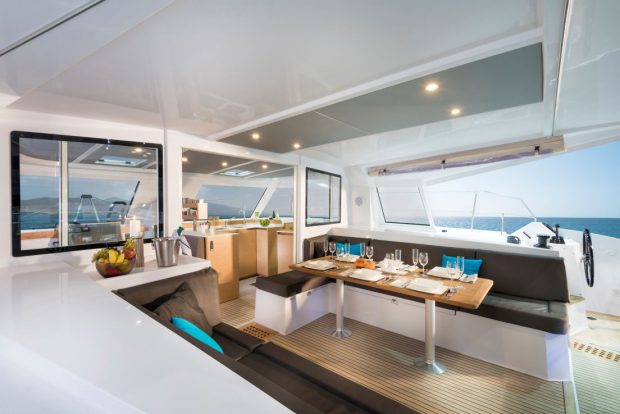 Have we asked ourselves – “what does OPEN actually mean” when describing the new Bavaria Nautitech 40 Open ?  This multiple award winning catamaran is really the first generation of cruising catamaran which embodies a brand new living concept by spatially allocating more bridge deck space to the “open” cockpit than the saloon. Studies over the past years have proven that sailors spend proportionally more “waking” time in the cockpit than the saloon. Of course when we sleep we retreat into the privacy of the hulls but when we are actually awake more time is spent relaxing, tending the sails, navigating, and socializing than simply just sitting in the saloon of the interior bridge deck.

For sailors wishing to enclose the cockpit – the ingenious zip down canvas enclosure can be deployed in less than a minute and you can even fully aircondition or heat the cockpit. For instance, one of our clients – a sailor in Ireland uses a space heater to stay warm in the cockpit. The aft crosswalk remains open so outside passage from one helm to the other still remains.

The Bavaria Nautitech 40 Open has certainly the biggest cockpit of any sub 50′ catamaran on the market today. By adding the flexibility of enclosing the space this innovative boat can be considered a revolution. Certainly the judges of the “Boat of the Year 2016  and “Best Boat 2016” agreed as the Nautitech 40 Open was the first ever yacht to win both coveted industry awards in the same year.

check out the photo gallery of the Bavaria Nautitech 40 Open