Generous room, more possibilities for a smart layout and the non-heel environment of a catamaran will allow sailors to perform boat handling tasks with greater facility than on a monohull. Beginners will gain confidence quicker, and a catamaran’s duplicate engine and steering systems will permit, not only better maneuverability, but also more efficient motor-sailing and the ability to beach the boat. Let’s look at these characteristics in detail.

Boat Handling is so much easier on a catamaran. Many novice sailors are always astonished by the fact that I know people whose first boat is an 18-Ton ocean going sail-catamaran. This should not mean that everyone can take a multihull around the world without experience, yet basic maneuvers are easily learned on a stable and more user-friendly catamaran. This greatly boosts operator confidence because the learning curve is often steeper. The twin engines and high helm position of a cruising catamaran greatly facilitate docking and tight harbor maneuvers. A monohull’s single screw will make a novice guess in which direction the prop will “walk” and often bow thrusters are the only answer to back a big monohull into a tight slip. By contrast, it will only take several times for beginners to understand the simple principles of the turning power of widely spaced, twin diesels and soon maneuvers that seemed impossible are mastered with confidence.

It is not uncommon to see women maneuvering a catamaran into a tight berth, while her husband prepares lines and fenders. The galley is certainly not the only place our female companions feel well and their reign has extended to the helm and beyond. It is a refreshing fact that I notice more women at the helm of a catamaran than on a monohull. 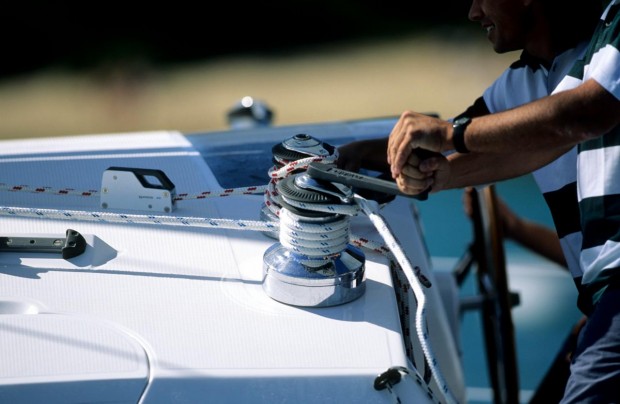 Have you ever seen a novice sailor clutching to the rail of a heeling monohull in a fresh breeze, dry mouthed, eyes bulging, and an expression of anxiety? These are involuntary reactions in a heeling and pitching environment, which is completely alien compared to dry land. Imagine the entire crew in foul-weather gear, huddled together and sitting in a cramped cockpit with water rushing by only inches away. Even worse, the novice is promoted to act as “rail meat” and is ordered to do something as useless as sitting on the windward deck. Now the wind increases and the captain orders the main sail to be reefed. The boat turns into the wind, the main sail flaps violently and the skipper shouts commands to overpower the howling wind. The novice sailor starts to wish he were somewhere else as the monohull labors head into the sea and waves crash against the bows causing spray to fly back into the cockpit. As crewmembers stagger forward to the mast and finally reef the mainsail, the boat is lurches with each wave, the boom whips dangerously from side to side and the noise and chaos is frightening. Our apprentice is ready to go home, thinking that only experienced and tough seamen are able to sail the ocean. He feels that he is definitely not one of them. Of course this example might be a bit exaggerated, but often not far from the truth.

Reefing a boat, even a catamaran can be a drama-filled event, where pulses usually quicken and crewmembers’ alertness increases. On a catamaran the novice would not feel that he is half submerged as he sits in a cockpit. Psychologically he would feel safer, sitting high and dry on deck, many feet away from the water. Even the newcomer could be sheltered in the coachouse saloon and still be part of the action by observing the events from the safety of the settee, and in the large cockpit he would be out of the way and not feel like a useless burden.

The beauty of a well designed cruising catamaran is that it does not necessitate rounding up against the wind to reef the mainsail. This greatly reduces the excitement of the action and avoids treading heavily into the seas, thus considerably eliminating the anxiety factor. Today’s fully-battened mainsails and lazy jack systems allow a multihull to be reefed even when sailing downwind. Apparent wind is reduced and the reefing maneuver is less taxing on boat and crew.

From running new sheets for the gennaker to performing a simple repair, operations are usually easier on a multihull owing to its wide and stable platform. For instance there is no need to tiptoe to a pointy bow to set and check the anchor. A multihull usually has the anchor resting on the front or central crossbeam with enough room to spare to attend to it. Making emergency repairs on a wide forward trampoline in the middle of the ocean (I have done my part) is so much easier than on a rolling stage of a monohull. Even searching for an important item stored on board, is certainly simpler, having additional elbow room, better light and ventilation, and more stable ground under your foot.