Catamarans posses the ultimate safety factor at sea. The fact that well-designed and constructed cruising catamarans are unsinkable makes them – at least in my mind – the safest platforms to cross oceans upon. Usually catamarans’ higher average speeds, shallower draft will also provide you with an active safety margin, and their stable, non heeling platforms, create a more secure operating environment. All these vital safety characteristics, essential to ocean cruising are lacking in a monohull. 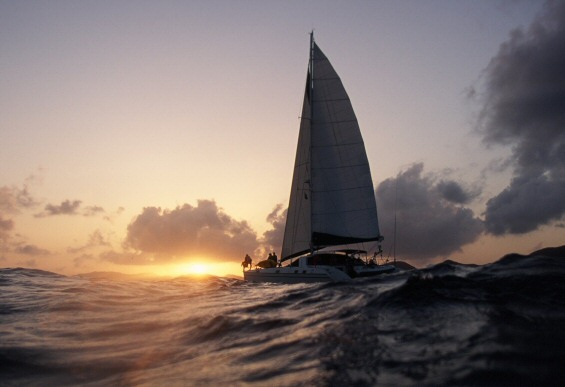 Catamaran unsinkability is probably the number one safety issue regarding any boat venturing to sea. When we speak about an unsinkable vessel, I mean a boat not sinking to the bottom of the ocean if holed. Unlike the Titanic, which was claimed to be invincible because of her watertight compartments (actually many of them were only partial bulkheads, as they did not extend all the way through the boat), a multihull is usually unsinkable because of the way she is built. Most modern catamarans are constructed utilizing composites, whereby a core material, usually foam, is sandwiched between two skins of resin impregnated cloth. This yields a very strong, rot-free structure, which is not only stiff and torsion resistant, but also makes the entire configuration float. The volume of the foam used in the core of the sandwich alone is usually more buoyant than the entire weight of the boat, including machinery, crew, and cruising gear. The addition of watertight compartments, usually many more than on a monohull (if she has any) will contribute to any buoyancy in case of a collision. One should not be fooled by catamaran manufacturers’ claims. The term “unsinkable” might mean completely flooded and in the very worst circumstance, result in a capsize. However, the fact remains, that one will be much better off on an inverted cat, presenting a great target to search teams, than bobbing in a tiny rubber raft, while ones monohull has been lost to the depths. In my mind this fact alone should be one of the most important considerations for anyone traveling even two miles out to sea.

Catamaran safety is also a function of speed. Some sailors interested in making the switch from their monohull to a catamaran care little about speed, arguing that they are not racers. However, after they realize that higher performance will allow them an active safety margin and more routing strategies around bad weather, more speed suddenly makes sense. We have often been caught 1000’s of miles from shore with a low pressure system looming to intercept our intended track. With the help of today’s sophisticated routing software and weather prediction, multihull sailors can often evade the worst of storms. Sometimes the difference of 20% more average speed will result in avoiding gale force winds and thus provide a safe passage.