The vast space of a catamaran is usually the first impression monohull sailors appreciate. The very first comments boat show visitors make, when stepping on a large cruising catamaran, is related to the roominess compared to a monohull of equivalent length. Close to ideal cockpit shelters, a large amount of storage and 360 degree saloon views, are just some of the space and layout advantages of catamarans.

Thanks to the wide beam of a multihull, its volume is much more than meets the eye. We all know that for every additional foot in length, the interior of a monohull rapidly increases. This phenomenon is taken to the extreme on a catamaran where even several inches additional boat length will provide more of everything then ever dreamed of. This is most noticeable when experiencing the vast space of a catamaran’s main deck.

The saloon and cockpit account for the major portion of a catamaran’s bridgedeck and usually span from the aft end of the cockpit to the central, mast bearing crossbeam. Not only is this area the most comfortable part of the boat, since it is close to the center of gravity (CG), but it is also where most of the action takes place. In fact more hours are spent in the cockpit or the saloon of a catamaran than in bed. In contrast to the typical monohull, where the cockpit is separated by a steep companionway ladder leading down into the cavity of the boat, a cruising catamaran provides a close to ideal surrounding. 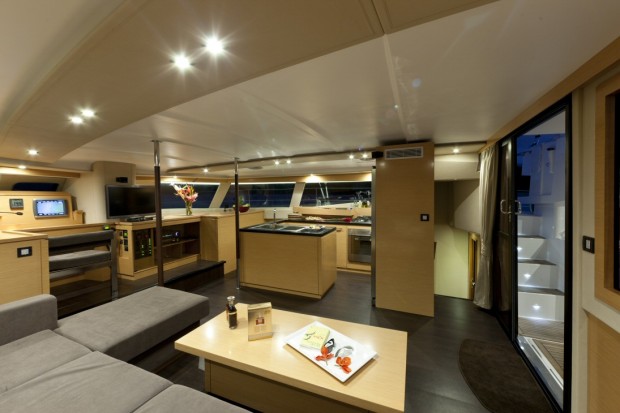 The cockpit, even on a 45’ catamaran, has enough space to separate the helmsman from lounging crewmembers. Often the sheltered corner, just aft and to one side of the saloon bulkhead, is utilized for a fixed cockpit table. We often have 10 people on our boat without feeling cramped. There is sufficient elbow room for winches to be operated and usually the mainsheet traveler, is either on the bimini arch or aft of the cockpit settee, well separated from passengers. On a monohull one sits “within” the cockpit, as one would in a bathtub. The helmsman will often have to squeeze past the huge wheel and the sitting and lounging area is less than one third of that of a cruising catamaran. The bitter ends of halyards and lines quickly clutter the largest cockpit and make them look messy. On a monohull it is often unavoidable to be sitting or standing on a rope, which is not necessarily comfortable or safe. The greater deck space of the catamaran also allows designers to route sail controls in such a way that they are not only strategically placed for efficient operation, but also out of harm’s way of the passengers. This is another luxury monohulls do not have.

The bimini is an essential item on a cruising boat and in my mind often underrated in its design. Few boats -monohulls and multihulls included- have smartly integrated or good looking biminis. Often one sees a beautiful looking yacht with sleek hull lines only to discover a ridiculous looking contraption of steel and canvas perched over its cockpit. Usually biminis on monohulls are more of an eyesore, as they are completely freestanding and do not benefit from the protective structure of the coach house as found on a catamaran. The only solution for the monohull is a small dodger, which protects the open companionway from spray and barely provides shade. In contrast, bimini structures on cruising catamarans are not only esthetically more pleasing, as they can be tied into the deckhouse, but they actually do what they are designed to do. 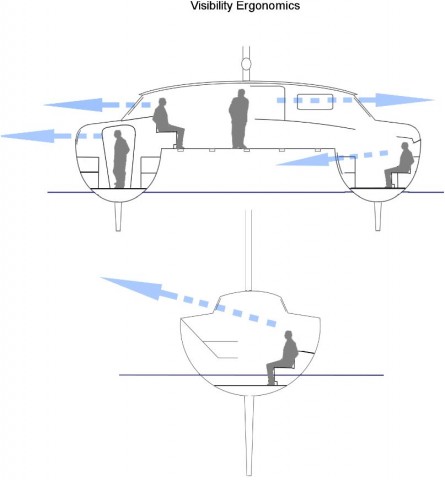 The giant sliding saloon doors of a multihull invite the crew to enter the bright saloon from the cockpit, which is often on the same level. There are no steep ladders or steps to crawl over. Similar to an expansive patio, the living area created by the bridgedeck saloon and cockpit rival those of small penthouses. They truly are one of the best parts of a catamaran. One can entertain, cook, navigate, or simply lounge with enough room not to be in the way of another crewmember. On long ocean passages this is a refreshing thought indeed. Some catamarans have the galley facing aft against the saloon bulkhead and feature a configuration resembling a bar. This permits the chef to easily pass drinks or food to guests in the cockpit. Try balancing beverages and plates up the steep companionway of a heeling monohull.

The 360 degree views from the saloon allow unobstructed views forward and aft. In most cases the settee is placed against the forward side of the bridgedeck in order to create a transverse passageway for the hulls. The seating arrangement is usually slightly elevated to provide an outside view without having to strain neck muscles. In inclement weather, looking outside from the protection of the saloon is especially reassuring especially to novice sailors. On a typical 45’ catamaran the dinette can seat 6-8 people for elaborate dinners without hindering the access and circulation in the saloon.

The galley is usually not far from the dinette. On most cruising cats the chef is where the guests are and is part of the social action. The cook is happy on a multihull, with plenty of storage space, ventilation and natural light. The front opening refrigerator does not necessitate acrobatics to get to the bottom of it, and communication with the crew in the cockpit does not require shouting or hand signals. In short, even the galley on a small multihull is any chef’s delight. 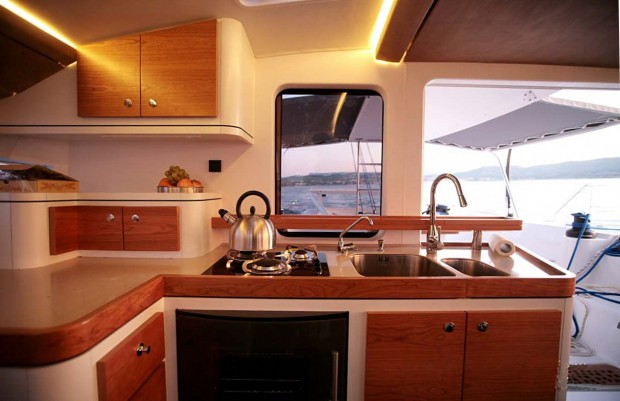 Storage space is often (too) abundant on a catamaran. Where “deep-storage” items disappear into a monohull’s bilges, the same goods are kept in house-hold type shelves and lockers. The number of closets found on a multihull are often surprising. Sadly, sailors tend to stuff them full of items which are never needed. Everyone falls into this trap. I have often discovered items on our own boat, which rotted in the bottom of a dark bin I never even knew existed. It should be noted that one of the drawbacks of light multihulls is the erosion in performance when loaded; therefore, care should be taken to keep the payload within the designer’s parameters.

Have you ever tried hand-steering a monohull from the inside navigation station? One is literally blind as there is no way to see forward. Inside-helm stations are often an afterthought on a monohull and it is rare that one finds a pilothouse boat with a proper forward facing navigation station. The majority of today’s cruising catamarans have inside helm stations, which feature duplicate instrumentation and joystick helm controls. The operator has 360-degree views, can navigate, make course corrections and even tack (with a self tacking jib) while sipping a drink while comfortably seated. Abundant space and the unique layout of the multihull’s bridgedeck permit this invaluable feature. Anyone who hand-steered a boat in torrential rain can appreciate the importance of an inside steering station. 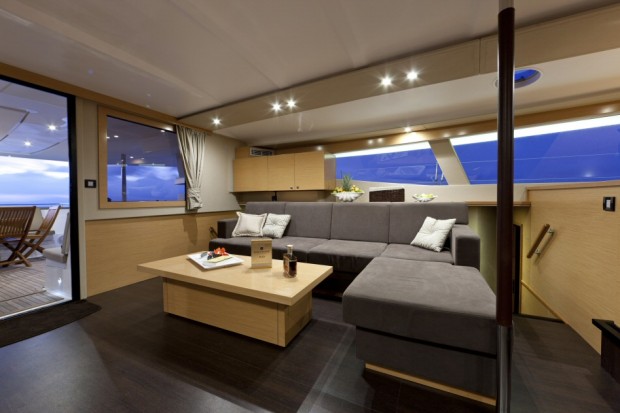 The charter industry realized the practical nature of spacious, money making catamarans, which can often accommodate 4 paying parties or more. Well separated in the four corners of the boat, 2 couples sleep in each hull and guests sometimes do not even realize that they are not alone. The privacy provided by the hulls is unique and one could sleep undisturbedwhile another couple watches a movie in the main saloon on the bridge deck.

Owner’s layout multihulls feature an entire hull dedicated to the proprietor. Even on a typical 40’ catamaran, a double berth aft is separated from a desk and lounge by closet space, while forwards one can find en suite heads with separate walk in showers. A cruising catamaran’s abundant space and accommodation plan will provide a higher standard of living. Because of this, the crew will find itself in a safer surrounding, and in a more ergonomically optimized environment than on any other vessel.