Catamarans and monohulls deal with stability in fundamentally completely different ways. In order to keep a monohull upright she will need ballast, which will resist the heeling force of the wind. Usually this ballast is in form of a weighted fin, often with a bulb attached to the bottom. The more a monohull heels, the more the Righting Moment (RM) and Righting Arm (RA) will increase, counteracting the overturning moment. On a monohull it is the offset of the Center of Gravity (CG) of the keel from the Center of Buoyancy (CB) when heeled, which will determine its stability. Depending on the type of monohull, the weight of the ballast can often constitute 30%-40% of the total displacement of the boat. This means that the only reason for the existence of tons of lead, is the necessity to keep its carrier upright. The weight of the keel is just the beginning of a vicious cycle, because the structure supporting the keel has to be even stronger (and heavier) to prevent the keel from falling off. This factor further indicates that the ballast of a monohull is just the starting point of a downward weight spiral and a keel actually increases the total displacement of a monohull by more than just the weight of the ballast. Further the attachment points on modern fin keeled monohulls are comparatively small and inefficient in relation to the task of keeping an extremely heavy structure attached. This is not the end of the story. The heeling monohull will produce more water drag and also by necessity has a wider hull beam, which will suck the boat into a wave pattern, limiting its speed, something that Archimedes already noticed 2200 years ago. The large bow wave that is produced by a fat hull shape will hinder the boat from surpassing its hull speed which is calculated as 1.3 x square of its waterline length. (1.3 x √WL). In the case of a catamaran, which has no keel to weigh the boat down, slimmer and more hydro dynamically optimized hulls, this theoretical hull speed rarely applies.

Typically cruising catamarans will have a beam to length ratio of roughly 50%, meaning a 45’ long cat will be about 22’ wide. This will not only result in a tremendous amount of space but also in a formidably stiff boat. A multihull will resist the overturning moment of the sails by its beam alone, without having fat hulls for form stability or a lead ballast. This results in a lighter boat, length for length, and a vessel with a higher speed potential, since the power to weight ratio will be higher. 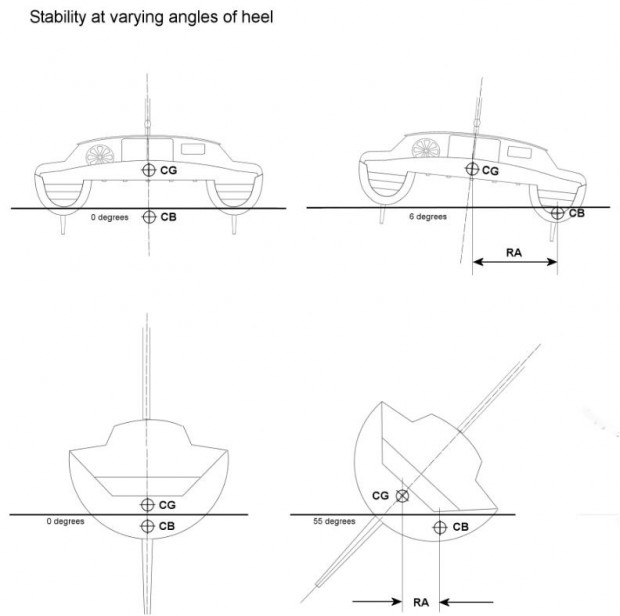 Unlike Hobie cats or very light displacement catamarans, a cruising catamaran will never lift a hull. I have never lifted a hull on a cruising multihull and am often startled by novices questioning me: “Does she fly a hull?” On a well designed cat, the shrouds will theoretically act as safety valves and break before the main hull could lift. Usually the breaking strength of the stays will be engineered to be less than the righting arm of the multihull, providing a great theoretical safety valve. Honestly, I have never been in a situation where a mast shroud parted because of an excessive heeling force. The only time I flew a hull on larger multihulls was on racers, such as Formula 40 cats, 60’ tris or 120’ racing cats such as “Club Med”. Their power to weight ratio is far beyond the normal scope of a cruising multihull and they are a subject of a different book.

When the extra weight of a ballasted monohull and its inefficient hull shape is taken into account, one can easily see that a catamaran is far more efficient and is simply a more hydro dynamically proficient structure. This fact usually translates into higher speeds, more miles sailed in a day, faster passage times and gallons of fuel saved. In eco-conscious times such as the decade we live in, isn’t this what sailing is all about? Traveling as efficiently as possible across the seas?