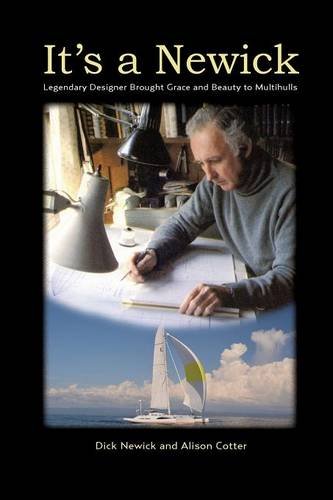 Probably known best for his beautiful, sweeping designs we will forever remember multihull designer Dick Newick who passed away at age 87 on Aug. 28 in Sebastopol, California.  Dick Newick helped advance the look of trimarans and catamarans  — which fly along with at least one hull out of the water — from unattractive and boxlike to sleek and contoured. The AC72 catamarans with 130-foot-tall wing sails now competing for the America’s Cup in San Francisco Bay descend from concepts Mr. Newick helped develop.

When asked where he had gotten the ideas for the 140 or so designs he completed, Mr. Newick, who believed in reincarnation, said he had been a Polynesian boat builder in a previous life. He called the Polynesians’ 4,000-year-old canoes “the wave of the future,” especially as he re imagined them.

The ancient and modern multihulls, he explained, shared a theme: simplicity. “It takes a good and creative person,” he said, “to do something simply.”

Dick – we wish you fair winds !

There is a new book on Dick Newick’s fascinating life: It’s a Newick