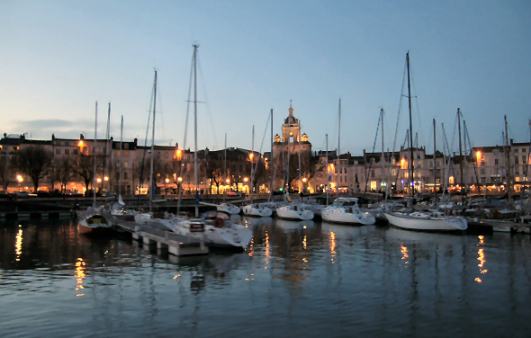 Featuring visits to the Paris Boat Show, Atelier Outremer on the French Riviera,
“Club Med” the giant cat in Monte Carlo and the Amsterdam Scheepvaartsmuseum.

Port de Versailles on the southern limits of Paris is the venue of the annual Salon Nautique, also known as the Paris Boat Show. My plane from New York had just landed at Charles de Gaulle airport after which I found myself in a massive traffic jam. Flashing overhead highway signs displaying the ETA to various exits pacified me temporarily. I imagined scenes of horrific accidents as suicidal motorbikers swerved through the stop and go traffic at breakneck speed. The french versions of Evil Caneevel were everywhere. It seemed obvious that Parisian bikers maintain an unshakable belief in the afterlife. Looking chic in their biking gear they, perhaps like me, were hurrying to catch the last day of the Paris Boat Show.

Among the hundreds of exhibitors displaying everything from books to chandlery, turning blocks to window treatments, the few multihulls presented were truly notable in every sense of the word. The 64’ tall double diamond rig of the brand new Outremer 45’ (u-treh-méhr) had to be accommodated by removing part of the ceiling of the gigantic exhibition building. Next to it stood a Catana 57‘, which according to rumor was accidentally dropped 6’ when brought to the show. This happened after I learned that Team Philipps was abandoned off Nova Scotia in a Force 12 and that the U.S. still did not have a president. Was there any good news ? Nevertheless “hats off” to the people at Catana who managed the situation to their best. Several larger multihulls were present, namely the Privilege 43‘, the Lagoons 43’ + 38’ and the new Dragonfly trimaran. Since I own the 43’ Outremer “FLO”, I was curious to meet her Designer Gerard Danson and his newest creation: The 45’. Gerard, a trained naval architect, impressed me as the epitome of the sailor as visionary. We both spent our time together crawling into every corner of the 45’ noting each and every detail and innovation.

After the long day at the show I found myself yet again trapped in Parisian traffic. This city’s one-way-street-maze is truly a piece of work. It will or will not eventually take you to your desired destination, challenging ones memory and selfcontrol. This labyrinth of streets makes the one in Vienna look like Manhattan’s simple grid system. With depleted energies I finally landed at a hotel in which mirrors were installed like wallpaper, including the bathroom and not least the mini elevator. The style here was definitely some version of 19 century napoleonic revival, grandeur squeezed into liliput spaces. The tiny birdcage elevator couldn’t accommodate me and my suitcase together. My luggage was subsequently wrestled up the narrow winding staircase by the cursing consierge.

Later that evening I found myself in an intimate bistro, the “Viking”, where I watched Olivier de Kersauzon, enthusiasts will know who he is, advertising the newest line of fragrances. The French certainly know their priorities: first sailing and its heroes, then a brief coverage of the US presidential election fiasco.

The 400 mile drive South to the French Riviera was an experience par excellence! Plastic Bertrand on the radio (80’s Euro-Punk) accompanied me through the intermittent drizzle while passing through medieval villages and Cezannesque landscapes. Remnants of roman viaducts, majestic witnesses of the rich history of the Rhone valley, traced my route to my next destination….La Grande Motte, a seaside resort town on the Gulf of Lyon. It is home of the boatbuilders of Atelier Outremer (translated: beyond the sea). The town is a realization of former President de Gaulle’s concept of a futuristic resort. His project is now viewed as an architectural blunder of concrete pyramidical conglomerations. Fortunately, however, the grand harbor establishes a foil of beauty housing over 1,500 boats of which a small number of cats dominate the scene.

Surprisingly the very rapid voyaging catamarans of Atelier Outremer aren’t widely known by US multihull enthusiasts. Until now, Europeans were Outremer’s main clients, making their presence rare along our shores. The popularity and following of Outremer”s in France has cult status with waiting lists for new boats of up to 16 months. Atelier Outremer employs more than 70 craftsmen who, in a spotless contemporary environment, create one of the world’s best multihulls.

Their Outremer 55’Light model won last year’s CRUISING WORLD magazine’s “Best Cruising Multihull 2000” award. Outremer’s great secret to success in Europe is simple: their unique classic sheerline, not found in any other multihull, lends them ultimate catamaran beauty. With more than 70 units built in the last 18 years they are, after the British Prout, the builders with the longest history and the most productive operation of multihulls in Europe. The first Outremer built I heard, is just starting her third circumnavigation. Amazingly none of their boats ever has capsized or experienced a major structural failure. The producers of Outremer keep a close track of all their boats, maintaining an updated file of each vessel from the date of their launch. Surprisingly yet is that every single Outremer catamaran is still sailing! Ruggedness and speed are these vessels strengths. The clever building technique, devoid of unecessary weight, is based upon Outremer’s construction procedure using the patented OCS®-Overlay Composite System. It is basically a traditional approach to composite construction techniques, using Honeycomb, Dyvinicell foam and solid laminates throughout the vessel within a meticulous vacuum bagging process. Enhancing the fact of the soundness and durability of these cats is the hard sailing they are given by their owners, many of whom are earning the status of ex-racers with families looking for more space without sacrificing speed. Amzingly the first new Outremer 45’, a basic stock boat, indistinguishable from the production vessels, won its class in the 2000 Singlehanded Transatlantic Race (Europe 1 New-Man Star) …and it was all upwind ! These boats are not only about winning races though. I hooked up my 64 year old friend Sam, who plans to live aboard and cruise the East Coast, with a new Outremer 45’. When Charles Kanter, a notable sailor, author and multihull expert, surveyed our 12 year old boat he praised the strong construction particularly of the areas where the cross beams join the hulls.

The Atelier Outremer yard is operated like a large family business; many of the craftsmen have been employed there for many years. I witnessed the launching of one of the 45’s. The finale of the event culminated in a party, which included the entire Outremer staff after which the happy owners spent the night on the boat, tied to the mooring. A charter fleet of 3 to 4 boats is constantly moored in the harbor of La Grand Motte to offer prospective Outremer clients ample sailing experience to test the vessels. My 3 day stay at the yard left me deeply impressed by the boats and the people who build them. It was now time to move on.

In hope of getting a glimpse of the monster cats preparing for The Race I drove to Marseille where a gathering of several of these radical boats was planned as a publicity stint.. This arrangement was regretfully canceled which allowed me time to enjoy a baguette and coffee in the romantic old port. Later in the day I met my wife Flo at the airport in Nice. Once again we were together and free! Bless my parents-in-law in the Netherlands with whom we were able to leave our two boys for several days.

Monte Carlo was not far and there might be a small chance to see one of the boats that would be participating in The Race. This time luck was on our side. Coming down the serpentines in Monaco Flo already spotted a massive wing mast. Club Med, with all of her 125,’ about the size of the Vienna Opera, was parked smack in the middle of the tiny Monte Carlo harbor. Carefree kids were executing 6’high air stints on its huge trampolines. Speechless for a while I nonetheless found myself begging to get on this wonderful boat for a quick look around. It was utterly surprising to learn that actually anyone could simply climb onto the behemoth cat without even taking their shoes off ! Yeah ! and viva la France! Flo and I climbed into every corner of the boat taking photos and notes of the details. Sitting in the forward nav-station up in the bow amongst the personal belongings of the crew, lent the experience a special informal feeling. At that moment the thought that 13 men would be sailing these beasts at barely imaginable speeds through Southern Ocean storms was hard to believe. Finding the brakes on these boats would be the hardest part.

It was time to move again. Destination Amsterdam where the Scheeppvaartsmuseum, the world famous Dutch Maritime Museum, was waiting for us. The weather, cold and dreary, contrasted harshly to the warmth of the French Riviera. In spite of the gloom and slush, nothing could stop me from embarking on the pilgrimage to this great naval institution built on the grounds of a 17th century cargo storage building. Here the Dutch East India Companie’s VOC vessels would unload the precious spices, metals and textiles. The VOC’s provided Holland with the largest GNP percentage throughout the 17th and 18th centuries; their trading voyages around the world took more than 2 years complete. The VOC established trading colonies as far away as India and the Pacific Islands creating efficient trade and maintaining relatively peaceful politics. A stark contrast to the Spanish and Portugese conquistadors who stopped at nothing to get South American gold. Spending an entire day viewing exhibits: thousands of full scale boats, models, illustrations, and paintings, I was surprised to find only on single multihull in model form: Hank Van de Welde’s bright yellow Zeeman catamaran, with which he attempted to break the solo around the world record.

Again time was running out, the one month long European multihull trip was coming to an end. Christmas and New Year’s celebrations were in store with my parents-in-law and children in Maastricht followed by the return flight home to New York. At 33,000 feet heading west at 900km/hr I had time to reflect on the great time I spent under the auspices of the boating world of catamarans. The Europe I found was full of diversity: charming Paris hosting the gigantic annual Salon Nautique and the savy people of Atelier Outremer, whose elegant boats grace the harbor of La Grand Motte. Marseille and Monte Carlo their old and new ports harboring the world’s most luxurious yachts and radical monster cats for The Race, then romantic Vienna where the innovative,super high-tech KKG cats are created and lastly Amsterdam’s Scheeppvaartmuseum. Was I lucky !

Text and Photographs by Gregor Tarjan