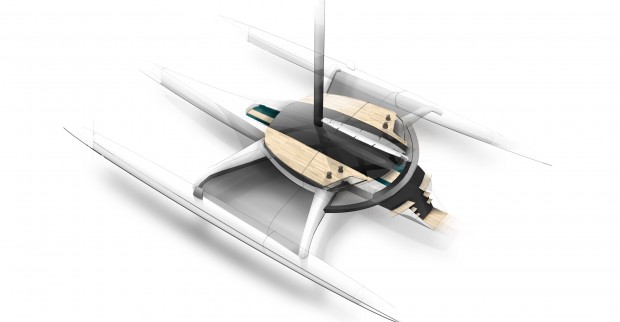 To undertake the crewed around-the-world record is as much about the human adventure as it is a technical and sporting challenge. The men and women working at Spindrift racing have been preparing this race against the clock for almost three years. The target: to sail around the world in less than 45 days, 13 hours and 42 minutes. Two giant tris are in the final days of their attempt and are quickly approaching the finish.

When it is about converting these racing innovation to the cruising world, Alibi is always at the forefront. The Alibi boatyard specializes in custom and semi-custom highly innovative performance multihulls. The yard is located in Thailand and is run by a passionate group of French expat expect – they are all former racers very well connected to the French racing scene – the so called French Connection.

The Alibi 100′ trimaran will surely turn heads. Imagine a 360 sea view loft blasting on foils at 30+ knots. It may sounds unbelievable but it is not and the first one hitting the water will make a bigger splash than Maltesse Falcon or Wally Yachts did in their time. It is probably a 50M bill but that may not be much compared with the centuries of fame associated…

For more information about this or other custom multihull projects, contact Aeroyacht