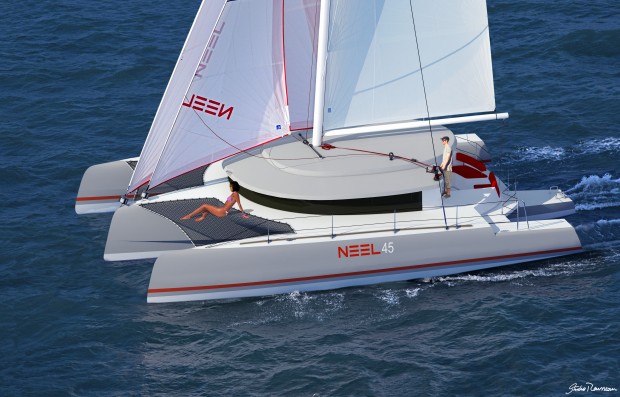 After the success of the first Neel 50 trimaran “Just Makes Sense”  the builder has just launched a model: The new Neel 45 trimaran of which 5 have already been sold. Sailing the Neel 45 trimaran you put yourself in an entire different league as they are usually faster and more efficient upwind than equal length catamarans. The Neel 45 trimaran has reverse bows which reduces pitching and maximize waterline lenght (44’26 ft). The Neel 45 trimaran offers superior privacy in the cabins, independence for the owner and crew who each have their own staterooms with en-suite heads with the same conviviality in saloon, kitchen and cockpit.

Two versions are available for the Neel 45 trimaran:

Owner’s version: A liveaboard or cruising trimaran including the owner’s cabin with its private bathroom, two double bedrooms with an additional bathroom and large storage capacity.

Charter version: By adding four beds and two sinks in the floats, the Neel 45 “Charter” trimaran can accommodate 12 people in 5 cabins. She is the ultimate high speed charter catamaran.