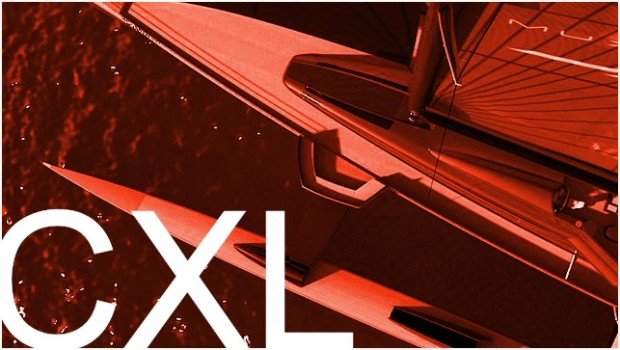 A folding luxury trimaran: For sailors who cannot live without their sports car. The 157′  CXL trimaran concept was a headturner at the Monaco Yacht Show in a number of ways: Not only will she be the world’s biggest sailing trimaran, but the outer hulls fold in for harbour access, and the superyacht yacht will also be delivered with a McLaren MP4 in a dedicated garage aft. Constructed in carbon fibre and fitted with retractable floats, the UltraLuxum CXL harnesses the very best of 21st century technology.

A trimarans is a fantastically stable platform at sea thanks to the impressive beam – the CXL is 75′  across – but it can be transformed to “just” 36′ in a matter of minutes, allowing access to a greater range of harbours and marinas. UltraLuxum signed a partnership with McLaren Applied Technologies in May to work together on the technology of the retractable beams. A McLaren MP4 will come as standard, housed in a dedicated garage and visible from the owner’s cabin through a wall of glass.