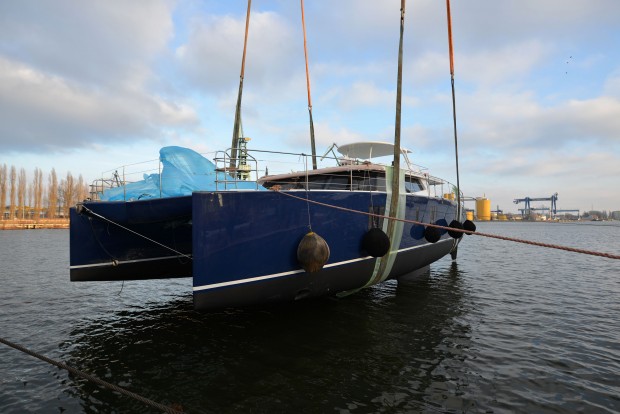 Sunreef 74 – OBSESSION hit the water on the last day of 2015 in Gdansk Poland and has been completed last week. Aeroyacht was instrumental and was hired as owner representative and project manager in the creation of OBSESSION – the 5th Sunreef 74 catamaran launched. This yacht represents the latest in construction technology and is equipped with carbon bulkheads, a massive carbon mast and a state of the art carbon furling boom. The manufacturer as made every effort to create a superyacht catamaran that actually sails well. This has been confirmed during the first days of seatrials when OBSESSION hit 12 knots in only 18 knots of wind with only main and jb. Once the carbon composite Code-O is set this luxury cruising catamaran will turn into an even eager performer.

The interior of the Sunreef 74 Nr. 5 has been specially designed by the owner’s interior design team and exudes elegance, comfort and modern chic. The Sunreef Yacht yard is already building the next Sunreef 74 (Nr. 6) which might be even faster as she will receive an all carbon deck and superstructure.

We are grateful to the owner and the yard to have been involved in this project and wish OBSESSION fair winds.

Find out more about the Sunreef 74 catamaran