“There now, this is sailing” 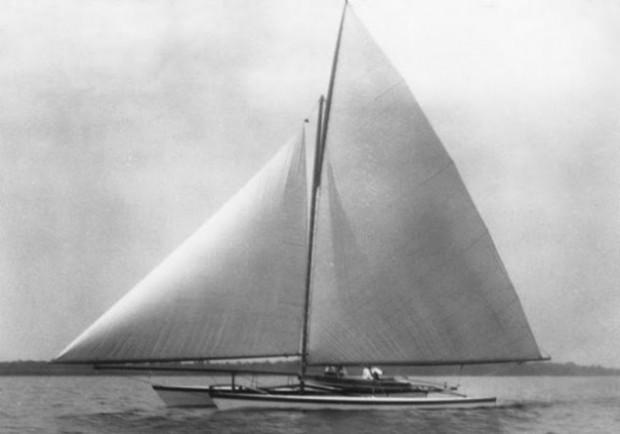 ” To me the pleasure of sailing is almost in direct proportion to the speed, and wallowing around in some potbellied abortion, heeled over and straining under a lapping jib or some other rule cheating windbag, seems quite ridiculous. Some yachtsmen seem to think the sole object of sailing is to beat a brother yachtsman, and have adopted certain rules of measurement that insure the wealthy to be the winners. They sail around courses perhaps at a rate of five miles an hour, and if they have won they consider themselves great sailors. But the general public, and particularly the sailor, is getting sick of that game. He sees no sense in trying to force several thousand dollars worth of lead through the water with several thousand dollars worth of rule cheating sails handled by a big crew. The sailor wants to sail, and says to hell with the wealthy, bridge playing sea lawyers who win their races traveling at a rate slower than their ancestors.

This reaction can be seen all over the world in the recent interest in catamarans, proas, etc., which supports my opinion that some sort of sailing machine can be developed which besides being fast, can be safe, strong and seaworthy. I must confess that I get much greater thrill out of sailing fast than winning a race, and care very little for the luffing, backwinding and crowding at the marks. That sort of business may be all right for sea lawyers and sadists who want to hurt someone else, whose only thrill in racing is to spoil the other fellow’s chances or rule him out on a technicality. But the true sailor is a pretty good natured cuss and says to hell with all that folderol. He says, “I want to see which boat will sail the fastest.” The principal thing he wants to beat is the record around the course or the record between ports, and when he beats some long standing record, he says, “There now, that is sailing.”