The Around Long-Island Race 2001 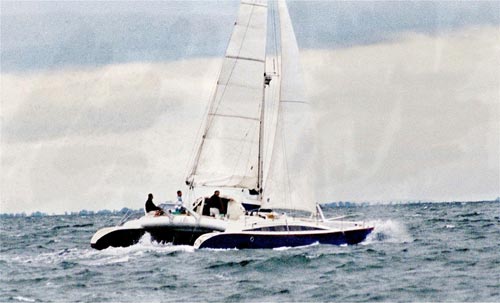 Miki, appeared wobbly as he stepped out of the car. No wonder, he arrived the night before from Zurich and was starting to feel his biological clock being slightly out of sync with the present time of 0815 EST at Sheepshead Bay Yacht Club, Long Island NY. Even for a pilot such as Miki, commanding Lear Jets and Gulfstream aircraft throughout Europe, a transatlantic flight left its marks. It was great to see my brother, especially that day, since he was part of our four man team participating in the Around Long Island Race on our Outremer 43’ catamaran FLO.

Stephan, my neighbor and good friend from Paris and Oliver from Martinique rounded off this international crew. The tasks for each were well defined. Stephan, a hobby gourmet cook, would create food, Miki the highly qualified professional pilot, would do the cleaning and Oliver would serve. All of us would eat of course. As it turned out, the first night was so rough that everyone took the day off.

The Around Long Island Race is a true classic. It is an annual sailboat race for monohulls and multihulls from 24′ and up. The boats race down Long Island’s south shore to Montauk Point at the eastern tip where they turn North to sail for Orient Point on the North Fork of Long Island. From Orient Point they sail west down Long Island Sound to the finish off of the Glen Cove Breakwater in Hempstead Harbor at Sea Cliff, NY. This 25th anniversary year saw 126 entries of which 11 were multihulls. Strong winds, produced by a passing front created the potential of setting a new elapsed time record. The present record is held by MIRAGE, a catamaran, that completed the 250 mile course in just under 20 hours. This time has not been broken since 1983 ! With the entry of TEAM ADVENTURE, Cam Lewis’ monster cat, PARAGON, the Formula 1, 60’ tri and FLUID DESIGN, a Formula 40’ cat, the prospect seemed high to break the 1983 record. Of course last years winner, my friend Kirk’s NEPTUNES CAR, a couple of Farriers and Dragonfly tri’s, a beautiful 55’ Wormwood called AVALON, a S. African La Digue 37 and Jim Beatmans Stilleto 27 would not make it easy for our Outremer.

As in any big regatta the period before the start was organized mayhem. Boats passing too close for comfort to one another one could see the crews anxious faces as one division after the next was started into a building NE wind. I observed NEPTUNES CAR and TEAM ADVENTURE downwind of the starting grid staying out of troubles way. I chose my favorite position and parked FLO upwind of the windward mark. As Miki was making sense of the different classes starting, we computed our ETD, started our countdown and checked for wind shifts. The 2 Dragonflies and the Farrier stayed in our immediate proximity. With the start less than 2 minutes away we unfurled the jib and jibed back around the windward mark for a respectable start along with the 3 tris. Kirk in NEPTUNES CAR was 5 minutes behind and I could not even see Jim’s Stilletto 27 and his 7 man crew. I later found out that they retired before the start, due to the deteriorating weather and prospects of a very uncomfortable and long slog to windward. FLO loved the weather, eating up the miles at 14-16 knots but not being able to pull away from the expertly sailed tris in these strictly upwind conditions. They all stayed slightly inshore of us beating into the building 20+ knot winds. Helicopters with TV crews were hovering overhead and chase boats were looking for the best angles. They sure had plenty of them. Over 100 monos heeled over 45 degrees with gritty crews on the weather rail. We passed them with respectable speed, spray flying in 20’ high clouds of vaporized spume. I wished I could trade places with one of them just to see the spectacle of the fast multis passing

Kirk’s 50’ high tech wingmasted Shuttleworth was now to leeward on our heels. I was quite pleased that it took him more than 3 hours to slowly pull even with us and finally take the lead. He later reported of slamming into the 12’ seas and taking tremendous amounts of water over the bows into the cockpit. The day began to fade and the wind and seas build. The Coast Guard issued a Small Craft Advisory with 10-12’ seas. With still full sail area we were punching into steep waves and at times had 35 knot of apparent wind. With FLO’s (too) conservative rig we all felt snug as a bug and the boat showed off her legendary seaworthiness. Although my wife ..the other Flo…lovingly prepared gourmet dinners, encapsulated in all kinds of special Tupperware containers none of us could think of preparing an elaborate meal. So with beers and pretzels in hand we realized that we were in the lead of the entire 126 boat fleet…Cheers !!!!….not for long. AVALON the beautiful wingmasted monster from division 14 crept up from behind passing us as PARAGON suddenly appeared out of the blue on an inward bound leg from the Atlantic. With its lower angles and higher speed the F1 tri must have gone far offshore and at this point appeared to be in the lead. This was the last I saw of them. (It turned out that PARAGON retired 20 hours later and AVALON became the first boat to finish, hours ahead of a 80’ maxi !!)

In the mean time Miki and Stefan were quite impressed with all this. They commented on how they all bounced off the bunks trying to sleep and that the experience of constantly having the feeling of being on a roller coaster was all very interesting. In these conditions I was reluctant of leaving the helm so I just hunkered down and enjoyed the wild Atlantic. I realized that as we were now 20 miles offshore the seas were getting steeper and when we took (for the very first time) a sudden seawater bath, with 100’s of gallons filling the cockpit and some even finding its ways into the hulls a (dim) light came on. Time to head inshore where the seas are calmer. Ok, we brought FLO about and see there, an hour later closer to the coast the winds dropped and things calmed down. When we heard the surf breaking on Fire Island we tacked back offshore and it was time to sleep for the skipper. I turned the helm over to my brother and bounced to sleep.

It must have been 8 am when I came on deck greeted by a beautiful crisp day that only a passing of a cold front can bring. The Atlantic had the color of deep blue and the white crests of the waves dotted the vast horizon. Against the wishes of my crew to continue on to France where a good bottle of wine, they insisted, costs a fraction of ones sold in the US, I took control of the helm and returned back in to US waters. Rounding Montauk point we radioed our time and set the asymmetric kite in the dying breeze. We could see the fast monos taking revenge and catching up in these conditions, being able to heel the boats, reducing wetted surface and ghosting along under huge high tech sails. After a splendid lamb “Korma” (an Indian specialty) and endless spinnaker jibes we passed through Plum Gut with a favorable tide. At this point we knew we were in the upper quarter of the entire fleet but could not see any other multis around. Back in the home waters of Long Island Sound the tactical game of balancing the tides with the available (fluky) winds to maximize VMG became of prime tactical importance. Usually, hours spent creating plots, predictions and calculations end up in a toss of a coin. Heads it was and we went for the far Connecticut shore, which promised weaker contrary tides (but as it turned out weaker winds). All day long we scouted the horizon looking for the wind lanes. My crew was happy reading, sleeping and preparing for the grandiose dinner of pork loin with rice and lemon sauce. Barbequing on the aft deck, watching the sun go down, I again realized how fortunate I was to be with my brother and good friends. This realization was of course celebrated with good wine and fine desert.

The second night was one of different challenges. The light winds were still with us and night time did not allow us to see the wind lines any more. So more guessing; we appreciated the large and often overlooked factor of luck in sailboat racing. Up went the large symmetric spinnaker when it was time to drop it to head more upwind, into a header with the genoa until it was time for the asymmetric. This excellent practice in sail handling went on all night until exhaustion started to set in. Passing Port Jefferson in the dawn and spotting the entrance to our home harbor gave us the extra boost to continue fighting the last shifts to the finnish, which now lay only 20 miles ahead. Hugging the shore we succeeded in taking advantage of the developing thermals and minimizing the affects of the current for the next 7 hours…until we ghosted into Glen Cove at 8.30 am after having sailed 250 miles.

Our finish was a respectable 4th in class after the 3 swift tris. We were after AVALON, the 2nd cat to finish and had the privilege (albeit short) to lead the entire fleet in the rough first leg in the Atlantic. Casualties of this memorable race included TEAM ADVENTURE, which retired due to a broken daggerboard, FLUID DESIGN, the Formula 40 which was dismasted and an unfortunate crew of a mono who lost a finger. As to this writing I could not confirm the unidentified Coast Guard MOB distress call we heard the first night and I do hope it was successfully handled.

This edition of the Around Long Island Race will be an unforgettable one yet again: great crew and a dependable swift boat mixed with challenging weather conditions made for an experience I do not want to miss next year. It was a record year for multihull participation of 11 boats. Along the East Coast the ALIR is one of the very rare offshore races and is also a great tune-up for larger multihulls preparing for the Bermuda or Halifax Race.