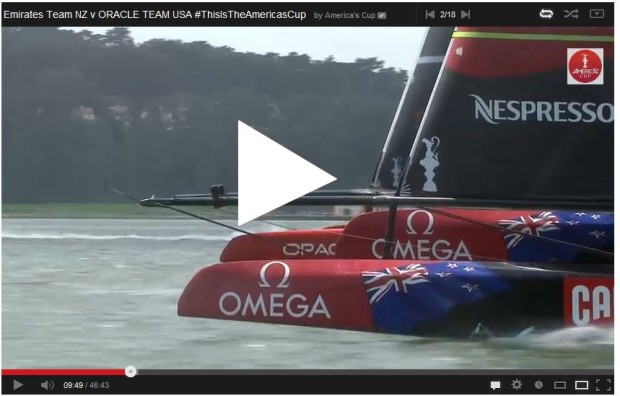 It is getting very tough for Team USA in the America’s Cup 2013. Challenger Emirates Team New Zealand won Race 5 of the 34th America’s Cup convincingly, and then Defender ORACLE TEAM USA used its one and only “postponement card” to try and put a halt to the Kiwi’s winning ways. Emirates Team New Zealand leads the series 4-0 after yesterday’s victory by 1 minute, 5 seconds. The winner of the 34th America’s Cup will be the first team to win 9 points. For the Kiwis that means five additional race wins and for ORACLE TEAM USA it means 10, due to a penalty imposed by the International Jury.

The rules allow the teams one postponement card and it may be used only to postpone a day’s second race, regardless of the reason. ORACLE TEAM USA skipper Jimmy Spithill said it was a collective decision by the onboard crew to request Race 6 is postponed until Thursday. Racing resumes on Thursday with Races 6 and 7, scheduled for 1:15 pm PT and 2:15 pm PT.