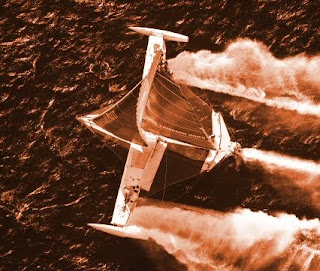 To start off the New Year we have some racy news of the amazing foiler trimaran “Hydroptere”. Recently, Hydroptere became the fastest sail boat on the planet. She was able to reach 51.36 knots over 500 meters and 48.72 knots over one nautical mile. This is faster than it took for the first aircraft to cross the English Channel ! The secret: The boat’s foils lift the trimaran clear out of the water, reducing resistance by 90%. An amazing feat that will lead to further developments and will surely trickle down to the growing fleet of ultra fast multihull racers in the near future.